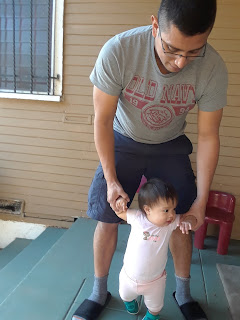 Life has granted me with lots of positive changes on me even if the price has been high and stressful, but with happiness and grateful moments in a bundle. This 2017 has been a particular year because it's the first year where I lived a whole year outside my country trying a new adventure in Los Angeles, California. This year my second daughter was born, and she adds to my life a special motivational feeling who makes me stronger than before. Sometimes I feel weak, like I just wanna give up (as the Eminem song Till I collapse says), but when I come home, and I see my daughters, they remind me what I am living for. Also, this 2017 I enrolled in the college in order to get a degree for Electricity and Construction Maintennance. I completed my first semester, and I passed my first three courses like a champ. But it hasn't easy because it's not equal studying being single than being married and having two daughters, there is no comparison, the time is really limited so I have to practice how to puzzle my time to complete lots of tasks on a day. I have some stories to tell such as one when I had to stop to pee behind Rancho Park in Cheviot Hills because I had driven about 2 hours to get to my house, and was 1 hour remaining to go, so I cannot hold in anymore, it feels like your bladder will pop off, so I stopped like I wanted to do something in Rancho Park, it was pretty dark, that made me easy to stop behind a tree even if the traffic was still running on the street, nobody cared what I had stopped to, it felt so good to release that amount of pee I was holding in, and I get back to the car, and I continued driving home. In addition, I had learned how to do field work in other areas, such as construction, electricity and remodel. On 2018 I want to achieve new goals to be added to my professional background though I don't have a clear panorama, but I know that working hard and climbing up all the obstacles, I will achieve. I wish you a happy hollidays and a happy 2018 to everybody. Thanks.
Posted by David at 11:17 PM